On Qana: Why are Steve & Pete AWOL?

I've searched much of the day for an official reaction to the massacre in Qana, Lebanon by PM Harper ('Steve') and have found nothing. It seems the only reference to this atrocity was this statement released by the Ministry of Foreign Affairs:

Canadian Foreign Affairs Minister Peter MacKay was unavailable for comment Sunday. Instead, his Department issued a release saying that "Canada remains concerned about the far reaching impact on civilians on the ongoing conflict in Lebanon."

Where's Steve? After all, his time dedicated to watching Coronation Street on Sundays is only a two hour committment (which he could Tivo anyway). Then's the hour or so it takes to attend church and maybe he goes to brunch after that. Who knows? Still, that doesn't exactly take up the whole day.

Is Steve still taking Sundays off like he did during the election campaign?

And what about Pete (Foreign Affairs minister)? Where's he? Golfing?

Why haven't either of these supposed leaders appeared in public today to make a statement (which would most likely be in defense of Israel anyway)?

That press release by the Foreign Affairs ministry is absolutely pathetic and don't count on the assumption that either one of these guys wants to take back their backing of Israel's so-called 'measured' response after this day's news. I'd like to feel smug and say that they're hiding somewhere with their tails between their legs. Most likely though, this is the position they currently find themselves in. 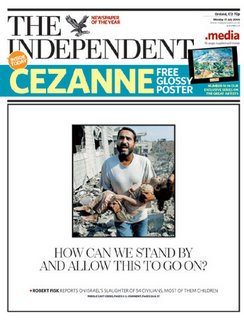