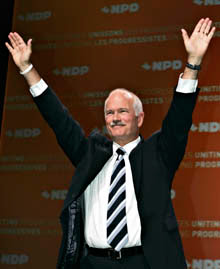 NDP leader Jack Layton lost his battle with cancer this morning. My condolences to his family and friends.

Tens of thousands of Canadians have written to me in recent weeks to wish me well. I want to thank each and every one of you for your thoughtful, inspiring and often beautiful notes, cards and gifts. Your spirit and love have lit up my home, my spirit, and my determination.

Unfortunately my treatment has not worked out as I hoped. So I am giving this letter to my partner Olivia to share with you in the circumstance in which I cannot continue.

I recommend that Hull-Aylmer MP Nycole Turmel continue her work as our interim leader until a permanent successor is elected.

I recommend the party hold a leadership vote as early as possible in the New Year, on approximately the same timelines as in 2003, so that our new leader has ample time to reconsolidate our team, renew our party and our program, and move forward towards the next election.

To other Canadians who are on journeys to defeat cancer and to live their lives, I say this: please don’t be discouraged that my own journey hasn’t gone as well as I had hoped. You must not lose your own hope. Treatments and therapies have never been better in the face of this disease. You have every reason to be optimistic, determined, and focused on the future. My only other advice is to cherish every moment with those you love at every stage of your journey, as I have done this summer.

To the members of my party: we’ve done remarkable things together in the past eight years. It has been a privilege to lead the New Democratic Party and I am most grateful for your confidence, your support, and the endless hours of volunteer commitment you have devoted to our cause. There will be those who will try to persuade you to give up our cause. But that cause is much bigger than any one leader. Answer them by recommitting with energy and determination to our work. Remember our proud history of social justice, universal health care, public pensions and making sure no one is left behind. Let’s continue to move forward. Let’s demonstrate in everything we do in the four years before us that we are ready to serve our beloved Canada as its next government.

To the members of our parliamentary caucus: I have been privileged to work with each and every one of you. Our caucus meetings were always the highlight of my week. It has been my role to ask a great deal from you. And now I am going to do so again. Canadians will be closely watching you in the months to come. Colleagues, I know you will make the tens of thousands of members of our party proud of you by demonstrating the same seamless teamwork and solidarity that has earned us the confidence of millions of Canadians in the recent election.

To my fellow Quebecers: On May 2nd, you made an historic decision. You decided that the way to replace Canada’s Conservative federal government with something better was by working together in partnership with progressive-minded Canadians across the country. You made the right decision then; it is still the right decision today; and it will be the right decision right through to the next election, when we will succeed, together. You have elected a superb team of New Democrats to Parliament. They are going to be doing remarkable things in the years to come to make this country better for us all.

To young Canadians: All my life I have worked to make things better. Hope and optimism have defined my political career, and I continue to be hopeful and optimistic about Canada. Young people have been a great source of inspiration for me. I have met and talked with so many of you about your dreams, your frustrations, and your ideas for change. More and more, you are engaging in politics because you want to change things for the better. Many of you have placed your trust in our party. As my time in political life draws to a close I want to share with you my belief in your power to change this country and this world. There are great challenges before you, from the overwhelming nature of climate change to the unfairness of an economy that excludes so many from our collective wealth, and the changes necessary to build a more inclusive and generous Canada. I believe in you. Your energy, your vision, your passion for justice are exactly what this country needs today. You need to be at the heart of our economy, our political life, and our plans for the present and the future.

And finally, to all Canadians: Canada is a great country, one of the hopes of the world. We can be a better one – a country of greater equality, justice, and opportunity. We can build a prosperous economy and a society that shares its benefits more fairly. We can look after our seniors. We can offer better futures for our children. We can do our part to save the world’s environment. We can restore our good name in the world. We can do all of these things because we finally have a party system at the national level where there are real choices; where your vote matters; where working for change can actually bring about change. In the months and years to come, New Democrats will put a compelling new alternative to you. My colleagues in our party are an impressive, committed team. Give them a careful hearing; consider the alternatives; and consider that we can be a better, fairer, more equal country by working together. Don’t let them tell you it can’t be done.

All my very best,

Although I didn't always agree with the compromises he made with the Conservatives, there is no doubt that he was a passionate, tireless fighter leading a party that desperately needed to have its voice heard throughout the country to provide a strong counter-balance to the damaging rightward shift Canada has taken in recent years. He lent his energetic presence to the issues that matter to me: poverty, homelessness, the environment, maintaining universal health care, womens' issues and speaking out against war and torture. This is certainly a loss for the left.

The world is a bit more quiet today without Mr Layton in it.

A very gaunt and weak-sounding Jack Layton, leader of the NDP, has announced that he has a "new" cancer and is temporarily stepping aside appointing Nycole Turmel as interim leader.

If you've ever known anyone dealing with cancer, you can't help but see the familiar weakness that's obviously ravaging his body but he spoke with optimism about beating it and returning to politics in the future.

As for the politics of appointing Turmel over someone like Thomas Mulcair, I suppose that will be fodder for the political water cooler set for some time to come...

Posted by catnip at 9:18 pm No comments:

So, there we have it: the Cons have a majority government. The NDP is the official opposition. Iggy led the Liberal party to a historic low in the house. The BQ is all but decimated and, at this point, Elizabeth May of the Greens might have won a seat for her party - finally. (Update - she won.)

Polls showed last week that the Big Orange Surge towards the NDP was a force but no one predicted this tsunami.

Ignatieff, who may have lost his seat at the time of this writing, (update: he lost it) was never an inspiring figure and I've wasted several pixels on my opinion of him on this blog through the years since he was anointed by the Libs. I never saw him as a potential prime minister and now, most of the country has told him that at the voting booth. As for the Liberal party, when you stand for mushy-middle centrism, you get what you deserve: a yawn and a wave goodbye.

Layton? Not my favourite person either - especially when he propped up the Cons in the past - but he deserves congratulations for leading his party to this monumental win. The NDP has more seats in parliament than they probably imagined they could have pulled off and the stark contrast between real left and right parties will make for very interesting times.

The BQ loss in Quebec shows a sea change in public opinion. I'm not surprised that so many Quebecois chose the NDP - not after watching the constant opposition to Canada's participation in the Afghanistan war. That province has often leaned more left than most others. I have to say that I admired Gilles' Duceppe's political skills. He's been quite adept. But - he lost his seat and now his party doesn't have enough seats for minority party status. That era is over. (Update: he resigned.)

As for Steve? Haven't we had ENOUGH of him? Now that he has majority power, we may be in for some seriously authoritarian moves (okay, even more of them than he's pulled so far). He doesn't have a hidden agenda. He's just never had enough power to ram it through. Layton and his new, large band of MPs are going to have their work cut out for them. I cringe at some of the right-wing crap this government will now feel very free to foist upon Canada. But - let them do it. Perhaps they'll push it just a little too far - as some of the wingnuts have recently done in the states. They may just end up hoisting themselves on their own petard. Cons always seem to manage that when they have absolute power. (Mulroney, anyone?)

Posted by catnip at 9:38 pm No comments:

Will Jack Layton be our new overlord?

Is this Gilles' last stand?

Will Elizabeth May finally get a seat in the house?

Canuck newspapers listed on the left <<<<<<<

Popcorn!
Posted by catnip at 6:51 pm No comments:

I've taken a long hiatus from blogging because I'd reached a point where my head was sure to explode last fall if I'd kept on chronicling the massive corruption, hypocrisy, and general insanity that was continually emanating from TPTB (The Powers That Be). Not that this was a new phenomenon - obviously - but I just couldn't justify expending one more ounce of my limited energy at that time to rail in any kind of meaningful way beyond just shouting, ARGH!.

I didn't disappear completely. I've commented on others' blogs and I've still maintained my News Junkie status. But my passion for attempting to write any sort of lengthy, convincing arguments about what I was witnessing diminished to the point where I probably should have just taken up Tweeting. To what end?

Anyway, I think I'm back now - sufficiently energized about the upcoming federal election, the implementation of the no-fly zone in Libya (which I'm against), the expansion of Western imperialism, the surrender to the moneyed interests and the resulting "austerity" (code for: screw the poor people) measures along with my continued voyeurism of the saga of the evaporation of Candidate Obama (as if he ever was a liberal) while President Obama moves further rightward with his every breath - among other things.

That's it. I'm also planning a blog redesign as soon as I can find something that I like and that I can actually make work.

Stay tuned.
Posted by catnip at 3:32 pm No comments: