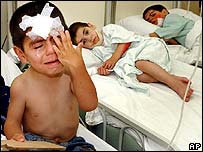 'The UN says almost a third of the dead and wounded are children'
- Kofi Annan called for a ceasefire again today and had harsh words for all involved, condemning Hezbollah's provocation and Israel's use of "excessive use of force" and practice of "collective punishment". You can read his full statement here. The request for a ceasefire was immediately rejected by Israel's ambassador to the UN. Annan will meet with Rice later today.

- A 13 yr-old boy was killed and several children were wounded in Gaza. Medical services in Haifa have been overwhelmed and a spokesperson for the International Red Cross said on Wednesday that their ambulances in southern Lebanon have come under attack by Israeli missiles, despite the fact that they are clearly marked.

- White House sock puppet press secretary Tony Snow on Thursday: 'If there's a humanitarian crisis, it's the responsibility of Hezbollah'.

- Bush and some of his warmongering buddies have fallen prey to simple thinkin' once again.

- Best Guess blog has posted the first installment of a series of previously unpublished interviews 'between the Professor [Edward Said] and Elaine Monaghan of Congressional Quarterly magazine that took place Tuesday, 18 July'.

In Palestine, and now in Lebanon, we are witnessing the consequences of the Administration's acquiescence for over 5 years in pretty much whatever Israel decides to do. This "policy" is based on an intensely ideological shared world view. This sees "terror" as the sole problem everywhere in the Middle East -- in Iraq, Palestine, Lebanon, Syria and Iran -- rather than real-world problems like occupation and other moral and realpolitik issues. It also generally sees the application of force (or repression) as the sole means to resolve problems.

That reality was echoed by Israel's ambassador to the UN today when he rebuked Kofi Annan for not using the word 'terror' in his statement to the UN.

- Two Israeli helicopters collided on Thursday. Ynet News reports one officer died as a result and 3 were wounded.

- Israel warned of a major ground offensive on Thursday.

As the death toll rose to 330 in Lebanon, as well as at least 32 Israelis, Lebanese streamed north into the capital and other regions, crowding into schools, relatives' homes or hotels. Taxi drivers in the south were charging up to $400 per person for rides to Beirut — more than 40 times the usual price. In remote villages of the south, cut off by strikes, residents made their way out over the mountains by foot.

The price of food, medical supplies and gasoline rose by as much as 500 percent in parts of Lebanon on Thursday as Israel's relentless bombardment destroyed roads, bridges and other supply routes. The World Food Program said estimates of basic food supplies ranged from one to three months.