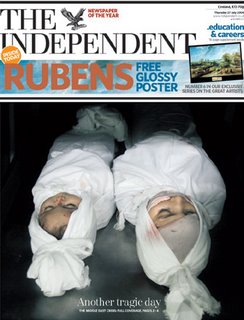 It is a jihad (holy war) for the sake of God and will last until (our) religion prevails ... from Spain to Iraq," al-Zawahri said. "We will attack everywhere." Spain was controlled by Arab Muslims for more than seven centuries until they were driven from power in 1492.

- Lebanon claims their casualty rate may be as high as 600 dead.

An opinion poll published on Thursday showed 95 percent of Israelis still believed the offensive in Lebanon was justified.

JERUSALEM – Israel's government decided today against expanding its offensive against Hezbollah but called up at least 30,000 troops to begin training for duty in Lebanon.

"We received yesterday at the Rome conference permission from the world .... to continue the operation, this war, until Hezbollah won't be located in Lebanon and until it is disarmed," Israeli Justice Minister Haim Ramon told Israel's Army Radio.
[...]
The European Union said today that Ramon's interpretation of the Rome meeting result was "totally wrong," and that Mideast hostilities should stop now.