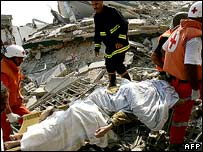 - An airstrike in southern Lebanon has killed 54 civilians. 34 of them were children. (figures updated below)

Displaced families had been sheltering in the basement of a house in Qana, which was crushed after a direct hit.

Lebanon's prime minister denounced "Israeli war criminals" and cancelled talks with the US secretary of state.

Israel said it regretted the incident - but added that civilians had been warned to flee the village.

Hundreds of Lebanese protesters staged a violent demonstration, ransacking the UN headquarters in Beirut, chanting slogans against the US and Israel and in support of the Hezbollah militants.

Lebanese soldiers are protecting the building.

Several countries have condemned the attack and renewed their calls for an immediate ceasefire - opposed by Israel, the US and UK.

The UN Security Council is to hold an emergency meeting at 1500 GMT on Sunday.
more...

It's about damn time. Meanwhile, the BBC also reports that Olmert has told Rice that Israel needs another '10-14 days' to complete its operation. What is its operation then? Is it really to destroy Hezbollah or is it simply to destroy Lebanon?

Qana was the site of an Israeli bombing of a UN base in 1996 that killed more than 100 people sheltering there during Israel's "Grapes of Wrath" offensive, which was also aimed at destroying Hezbollah.

And the Israeli government once again had the audacity in this massacre to claim that 'the Shia militant group was responsible for the Qana strike, because it used the town to launch rockets.' So that gives them the right to obliterate the lives of 34 children? I thought Israel had precision weapons. Is it now going to claim that Hezbollah was firing rockets from that particular building? I cannot even put into words how incensed I am about all of this insanity. Israel must stop now and it must be held to account this time for its war crimes.

- I swear my head really is going to explode for real today. Listening to Israel's UN ambassador on Meet the Press saying that he 'would not be surprised' if the timing of this Israeli airstrike - remember that: Israel attacked - was chosen by Hezbollah to coincide with Rice's visit to the area. Well, holy flipping Orwellian propaganda Batman! What kind of drugs is he on??

- George Stephanopoulos to Israel's ambassador to the US on This Week today:

Q: Was this a war crime?

Ayalon: Absolutely. This was a war crime committed by Hezbollah.

- The emergency meeting of the UN Security Council is over for now and will reconvene later on Sunday. More details when I find a link. Annan is holding a press conference as I write this. Annan: 'There is no military solution'.

Update: BBC has more information about the Security Council meeting.

Several states have condemned the strike on Qana - the deadliest of the conflict so far.

"Action is needed now before many more children, women and men become casualties of a conflict over which they have no control," Mr Annan told the council.

"I'm deeply dismayed that my earlier calls for immediate cessation of hostilities were not heard, with the result that innocent lives continue to be taken and innocent civilians continue to suffer."

- Reuters has updated numbers of the casualties in Qana: 60 Lebanese civilians including 37 children are dead. Olmert offered his stock phrase of so-called regret 'deep sorrow' over the deaths. This is the same wording he uses every single time innocent civilians are killed by his army. 'deep sorrow', my ass.

Update: Forget all of that Israeli biased propaganda you're hearing on CNN and reading about on right-wing blogs. The International Red Cross has spoken:

"These are all civilians," said Bassam Muqad of the Red Cross. "There's no base here. This isn't a military area. There's nothing around here. People thought they were safe in the shelter." 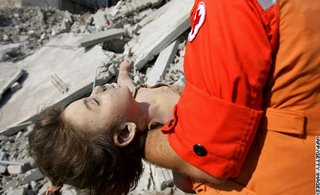 Update: While Israel has said it will suspend the bombing of Lebanon for 48 hours in the fallout of the Qana massacre, an announcement made late at night in the region, the UN released a toothless statement, reportedly so due to the efforts of the US to block a stronger one from being passed by the Security Council. John Bolton strikes again.