It looks like I may soon have to change the title of these updates because it's being reported that Israel has given Syria an ultimatum:

The London-based Arabic language newspaper Al-Hayat reported Saturday that “Washington has information according to which Israel gave Damascus 72 hours to stop Hizbullah’s activity along the Lebanon-Israel border and bring about the release the two kidnapped IDF soldiers or it would launch an offensive with disastrous consequences.”

The report said “a senior Pentagon source warned that should the Arab world and international community fail in the efforts to convince
Syria to pressure Hizbullah into releasing the soldiers and halt the current escalation Israel may attack targets in the country.”

Israel has targeted areas near the Lebanon/Syria border but there are no reports yet of strikes in Syria.

- Please read this post by a Lebanese blogger who is on his or her way to becoming a refugee in Syria. It just doesn't get any more raw than this and, frankly, some of the comments left there - although opposition is to be expected - totally ignore the inhumanity of the situation and treat this person as if they actually had some power to solve this crisis. Nothing could be further from the truth. Then again, blaming the victim is an easy game for some to play. But you don't play it when people are living under the threat of death. 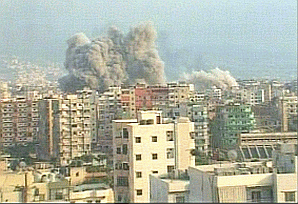 - During a joint press conference with Bush from the G8 meeting in Russia, Putin proclaimed, Russia would not take part 'in any crusades, in any holy alliances', referring to the growing tensions in the Middle East.

Stephen Hadley, Bush's National Security adviser, had this to say about Putin's comments:

Q Can I ask, what did you take President Putin to mean when he said that they wouldn't participate in any crusades or any holy alliances? What was that a reference to?

MR. HADLEY: You know, I asked myself the same question. (Laughter.)

Q Did you get an answer? (Laughter.)

MR. HADLEY: I'm still taking it under advisement. (Laughter.) I'm going to let myself know what I think a little bit later.

Yes, people are dying and Washington is cracking jokes and laughing.

- Hezbollah struck the resort town of Hiberius on Saturday. No serious injuries were reported. The death toll is mounting:

Over all, more than 80 Lebanese have been killed, most of them civilians, and more than 200 wounded, in the past four days, according to Lebanese officials. Hezbollah rockets have killed four Israeli civilians and wounded more than 150 since the barrage began on Wednesday.

Bush offered this simplistic perspective: 'In my judgment, the best way to stop the violence is to understand why the violence occurred in the first place.'

Understand it later, Bush. Do something about it now.

- Israelis huddle in bomb shelters. As one woman said, 'Every boom is like a knife slicing my skin.'

- 1:05 am (Lebanon time) CNN reports that five new Israeli airstrikes have hit the southern suburb in Beirut and that Israeli troops have gone back into Northern Gaza.

- Nine deaths reported in Haifa rocket attack, via CNN. link
Posted by catnip at 11:07 am