To the tune of The Mary Tyler Moore Show theme song... 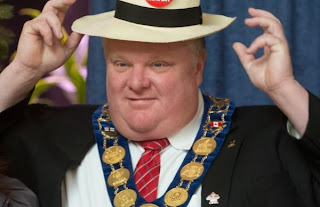 Who can turn the world on with his bile?
Who can take a slow news day
And suddenly make it all seem worthwhile?
Well, it's you Rob and you should know it
With each prance and every little presser you show it
Ford is all around, no need to waste it
You can have a mic, why don't you take it?
You're gonna spill it after all
You're gonna spill it after all...
Posted by catnip at 7:49 am 2 comments:

It just doesn't get any better than this...

“I’m gonna kill that f**king guy. I’m telling you, it’s first-degree murder,” Mayor Rob Ford rages as someone in the room secretly uses a cellular phone to film the chief magistrate’s addled tirade.
The target of the mayor’s anger is not in the room and is not known to the Star.
“I’ll rip his fucking throat out. I’ll poke his eyes out. . . . I’ll make sure that motherfucker’s dead,” Ford says, then hitches up his pant legs as if bracing for action.

"Again I've made mistakes, all I can do is reassure the people that … I don’t know what to say," he said.


"I just want to come out and tell you that I saw a video … it's extremely embarrassing."

He added: "Obviously, I was extremely, extremely inebriated… that's all I have to say for now."

Somebody needs to drag his butt to rehab. Pronto.
Posted by catnip at 11:25 am 2 comments:

The Senate: Where due process went to die today...

This is a dark, dark day for Canadian democracy and justice. The unelected senate took it upon itself to create a new system of so-called accountability by unceremoniously turfing 3 senators who haven't been legally charged or convicted of anything - all at the behest of Control Freak Steve. And then the Con leader in the senate, Claude Carignan, whose office quietly received a $600,000 raise in its budget last week had the nerve to attack the Liberal senators after the votes - conveniently ignoring the fact that several Con senators also voted against the unconstitutional motions to suspend while the rest of the clapping seals went right along with the dictates of the PMO.

Due process? I think not.

But this isn't over - not by a long shot. The RCMP are still investigating and there will be more bombshells dropping on the Con party by the time this is done. Incoming!

"Probably approximately about a year ago."

(Probably? He can't even admit it to himself. You don't say you've smoked crack in a drunken stupor unless you KNOW that you did.)

"One time in one of my drunken stupors."

"There's been times when I've been in a drunken stupor."

Rob Ford just admitted to reporters that he smoked crack.

It's the media's fault that he didn't come clean before now:

“I wasn’t lying. You didn’t ask the correct questions,”

So, Toronto voters, what now?

Steve's Senate: The Grift That Keeps on Giving

The average Canadian can be forgiven for not being able to follow all of the bouncing balls being bunted about in the PMO playHouse as Stephen Harper fancies himself the prime mimicker of everything decent and upstanding while failing to keep his senate scandal stories straight from one day to the next. Absolute control corrupts absolutely (to bastardize an old cliché).

Last week, CBC/The National's Peter Mansbridge summarized some of the history quite well in this video clip, in case you need to refresh your memory or catch up on the sordid affair.

Caution: may leave a bad aftertaste, especially if you're a Conservative...

“Our opponents accuse us of being unfair, nasty and ruthless and portray the offenders as victims, even martyrs. Friends, in terms of such opponents, I couldn’t care less what they say.”

Well, we already knew he couldn't care less - about a lot of things. But to not care less about imaginary  ideas you've concocted about your enemies...well...that takes a certain sort of something, doesn't it? The word "strength" does not come to mind. "Delusion", maybe.

And, ironically, it is exactly the classic Martyr personality that when confronted with its own weaknesses and mistakes, blames them on anything it can shake one of those thundersticks at. He blamed the courts, the Liberals, the NDP... never mentioning the fact that Conservative senators are also opposed to the senate motion to suspend Brazeau, Wallin and Duffy without pay. Something about "due process" - a concept Steve doesn't seem to understand.

Due process, however, has now come knocking on the PMO's door:

They may be paying a little visit to the office of Senator Irving Gerstein any day now as well - he who let it slip out (rather loudly and in front of hundreds of people) that he was in the thick of L'Affaire Duffy.

The chamber formerly known as that place as sober second thought will finally vote on the fate of the senators three on Tuesday.

No matter what, this isn't over by any stretch of the imagination. Even a delusional man can figure that out. Well, most of them can, anyway.