Lawlessness and Disorder in Iraq 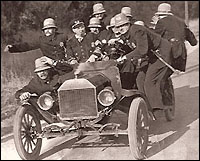 The US military has announced that it's tripling the number of embedded military trainers in Iraq using combat troops that are already on the ground. It's also retraining Iraqi police in yet another futile attempt to make up for the fatal mistakes it has made while finding every possible excuse for the current state of affairs which the shady defence contractor DynCorp has completely bungled under the non-supervision of an absolutely clueless US administration.

"Looking back, I really don't know what their plan was," Mr. Kerik said. With no experience in Iraq, and little time to get ready, he said he prepared for his job in part by watching A&E Network documentaries on Saddam Hussein.

As for the Iraqi military:

He [Brig. Gen. Dana Pittard, whose Iraqi Assistance Group oversees training of Iraq’s security forces] also highlighted three factors which he said were inhibiting the performance of the army. The absence of a Uniform Code of Justice meant that Iraqi commanders had no way of disciplining soldiers who went absent without leave.

The absence, too, of a national banking system meant that many soldiers whose units were far away from their families disappeared for days when they travelled home to give them their pay. Some simply deserted because the travel costs ate up much of their small salaries.

“If we had a banking system, that would help retention. At present there is a 12 to 14 percent attrition rate,” he said.

And that obviously begs the question: what's the use of a troop surge in Iraq when the foundations of the system are either so tenuous or non-existent?
Posted by catnip at 12:27 pm