And so this is justice?

CNN's reporters are now officially on the 24/7 Saddam Death Watch - eagerly covering every rumour and possible move towards his inevitable demise. I'm surprised the network doesn't have a fancy new graphic banner for the event. They're almost as excited as sportscasters before the Superbowl. It's nauseating.

"This afternoon I have a message for the Iraqi people: This is further assurance that the torture chambers and the secret police are gone forever. You will not have to fear the rule of Saddam Hussein ever again."
- George W Bush on the capture of Saddam Hussein, December 2003

No, but they certainly had much to fear from Bush - as they and people from around the world would come to learn over the coming years.

An editorial in Friday's Washington Post echoes the misguided sentiments of those who don't really care about the concept of true justice. No one demanded perfection, yet that is the strawman the WaPo editors use to set up their argument for the dismissal of the mockery that was Hussein's trial:

For those who oppose the death penalty, as we do, any execution is regrettable -- and this one, should it come to pass, will follow highly imperfect judicial proceedings and may in the short term inflame sectarian divisions. But it's hard to imagine the death penalty existing anywhere for any crime and not for Saddam Hussein -- a man who, with the possible exception of Kim Jong Il, has more blood on his hands than anyone else alive. Should the world see his end in the coming days, the justice will be imperfect. But it will still be justice.

Will it? Ponder this: 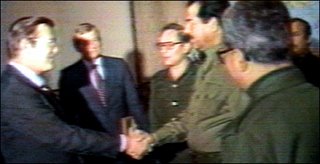 How soon the Washington Post forgets one of its most important stories of years gone by:

The Reagan administration and its special Middle East envoy, Donald Rumsfeld, did little to stop Iraq developing weapons of mass destruction in the 1980s, even though they knew Saddam Hussein was using chemical weapons "almost daily" against Iran, it was reported yesterday.

US support for Baghdad during the Iran-Iraq war as a bulwark against Shi'ite militancy has been well known for some time, but using declassified government documents, the Washington Post provided new details yesterday about Mr Rumsfeld's role, and about the extent of the Reagan administration's knowledge of the use of chemical weapons.

The details will embarrass Mr Rumsfeld, who as defence secretary in the Bush administration is one of the leading hawks on Iraq, frequently denouncing it for its past use of such weapons.

The US provided less conventional military equipment than British or German companies but it did allow the export of biological agents, including anthrax; vital ingredients for chemical weapons; and cluster bombs sold by a CIA front organisation in Chile, the report says.

Intelligence on Iranian troop movements was provided, despite detailed knowledge of Iraq's use of nerve gas.

Where's the 'justice' for that?

And where's the 'justice' for this?

Do the Iraqis deserve piecemeal, flawed justice bent solely on revenge for all that has happened to them and their country at the hands of US administrations as well? Or should they, as all truly fair and functioning democracies are supposed to provide, demand and receive what is really due to them: nothing less than the best processes that would be afforded to victims of horrendous crimes? You do not honour victims by making them complicit in political judicial games. You honour them by ensuring that their rights and those of the accused are fully respected.

When will our consciences grow so tender that we will act to prevent human misery rather than avenge it?
- Eleanor Roosevelt

Injustice anywhere is a threat to justice everywhere. We are caught in an inescapable network of mutuality, tied in a single garment of destiny. Whatever affects one directly, affects all indirectly.
- Martin Luther King Jr

Related: Dahr Jamail reports from Baghdad about the reaction in Iraq to the pending execution of Hussein.

Update: Saddam's lawyers have have petitioned a US court to block the release of Hussein from US custody and are seeking a stay of execution.

A similar request by the former chief justice of the Revolutionary Court, Awad Hamed al-Bandar, was denied Thursday and is under appeal. Al-Bandar also faces execution. The Justice Department argued in that case that U.S. courts have no jurisdiction to interfere with the judicial process of another country.

Update: The execution was carried out.
Posted by catnip at 11:10 am