Harper to Make Announcement (of something) at 5:30 p.m. ET

Steve's going to make an announcement this afternoon. What do you think it will be?

And just when I was heading out of the door too...why do you hate my life, Steve? 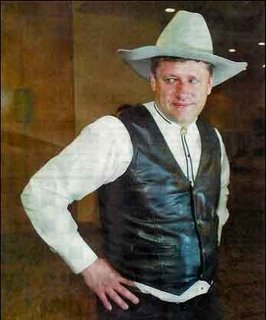 OTTAWA (CP) - The prime minister's tumultuous relationship with the national media is taking on a comic twist this holiday season.

Stephen Harper is inviting members of the parliamentary press gallery to a yuletide reception at his official residence on Monday, Dec. 19. One problem: there is no Monday, Dec. 19 this year. Officials in Harper's office said the erroneous date on the invitation was unintentional. The event at 24 Sussex Drive is actually being held on Tuesday, the 19th.

Sure...sure...he was just hoping the media wouldn't show up...