Wanker of the Day: Tony Clement 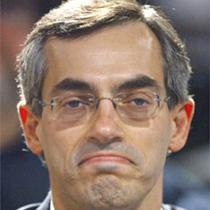 Federal Health Minister Tony Clement had a very public tantrum today in Nova Scotia (as Conservatives are famous for) following criticism he and Steve received this week about the fact that they have put off announcing their new plans for AIDS funding while the International AIDS Conference was happening in Toronto. Steve, of course, didn't bother going to the conference while Tony did and concluded this:

The federal minister of health says he didn’t make funding or policy announcements at the International AIDS Conference because it was becoming difficult to have a “rational discussion.”

During a visit to Nova Scotia on Friday, Tony Clement said that activists and “so-called experts” had started to skew the dialogue towards grandstanding political demands during the weeklong gathering in Toronto.

“That conference in our view was becoming a place where you couldn’t have a rational discussion,” he said during an interview.

He then cited this as an example of the negative political atmosphere at the conference:

"It wasn't only the Canadian context. There was a delegate who demanded the resignation of the South African health minister. It was really becoming a very politicized conference. It became a point where it wasn't an appropriate venue."

And why was SA's health minister singled out?

Wainberg obliquely opened the attack on South Africa, where the government of President Thabo Mbeki has confounded and enraged the scientific and public health world by initially denying the link between HIV and AIDS and then resisting the use of antiretroviral drugs. Mbeki’s health minister, Dr Manto Tshabalala-Msimang, promotes the use of lemons, garlic and beet root as treatments for AIDS.

“We recognize the problem that is sadly posed by HIV denialists,” said Wainburg. “It is correct to ask how many additional millions of HIV cases are attributable to the failure of certain world leaders to directly and honestly address issues of HIV-AIDS with their people.”

But Lewis named names. “South Africa is the unkindest cut of all.”

“It is the only country in Africa whose government continues to propound theories more worthy of a lunatic fringe than of a concerned and compassionate state,” he said, noting between 600 and 800 people a day die of AIDS in South Africa.

“The government has a lot to atone for. I’m of the opinion that they can never achieve redemption.”

Lewis, who has been barred from functioning for the UN in South Africa because of his opposition to the government’s positions, admitted he has been told that as a UN representative he should not be publicly critical of a member state.

“It is not my job to be silenced by a government when I know that what it is doing is wrong, immoral and indefensible.”
link

Tony Clement: wanker of the day.
Posted by catnip at 7:27 pm