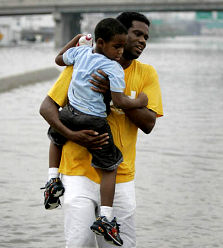 Pain. Overwhelming pain, horror, outrage. Pain and shock. And so much sadness.

That's what I felt as I watched the criminal negligence of FEMA and the Bush administration as they let people suffer and die during the aftermath of Hurricane Katrina while the rest of the world saw it all unfold before their eyes in a state of stunned disbelief and desperation - so much desperation.

How many times did we all yell at our TV sets: Why isn't anybody doing anything?

The massive swells of people at the NOLA Convention Center. The sick, the disabled, the babies, the old and and infirm sitting on the sidewalks - waiting. And waiting and waiting. The insanity. The absolute decimation of lives, towns, parishes, cities, farms, homes, land, wildlife, pets, infrastructure, hospitals, schools. And yet - no one with governmental power was prepared. And, no one, except heckuva job Brownie has paid for their ineptitude.

There has been no accountability.

Living so far away here in Canada and feeling so helpless, the only thing I could do was to volunteer for Wikipedia's People Finder Project. I had to do something. The hours spent inputing names and messages with the hope that victims, family members and friends would somehow find each other in the midst of mass confusion was one thing I could do, but it was nothing compared to those brave individuals and groups who went down to the hurricane region on their own steam to save lives and help the stranded, wounded and desolate. They became America's heroes. And, deservedly so. They did what was put in front of them, ignoring the personal sacrifice involved, and they showed the real spirit of the American people while their government remained impotent and confused.

The rage still whirls within me. The lives torn apart will take decades to heal. Homes can be rebuilt, but hearts take much longer to repair.

I wish I could have done more.

My thoughts are with all of you directly affected and my wishes for security, sanity, health, love and a place to call home once again are all I can send on this anniversary.

May you find peace and strength. And may the children be loved and cared for for the precious survivors they are - never to live through such abhorrent neglect again during their lifetimes.

Please participate in the Katrina Blogswarm. Let the victims know they haven't been forgotten and please spread the word.

Related: A man posing as a HUD official spoke to a NOLA reconstruction meeting, causing major confusion for all involved until his identity was revealed:

Two members of the Yes Men, a group of environmental and corporate ethics activists, duped business executives and some news organizations earlier today when they posed as top HUD officials and announced the agency planned to renovate several housing developments now slated for demolition.

One of the men said they set up the hoax after receiving an e-mail solicitation from Equity International -- the group staging the conference -- in search of conference speakers. They responded by saying HUD secretary Alfonso Jackson would like to speak, after which Jackson was placed in the conference lineup after Gov. Kathleen Blanco and Mayor Ray Nagin.

The two men, one of whom posed as a HUD "deputy special assistant" Rene Oswin and the other as Oswin’s press secretary, showed up at the Pontchartrain Center in Kenner this morning and told organizers that Jackson couldn’t make the event, and that they would speak in his place, one said.

Then the man posing as Oswin gave a 15-minute speech saying that HUD was reversing its policy and would reopen all public housing in the city. While the speech was under way, the group e-mailed a bogus press release to major news outlets with the same announcement.

Let's hope these crass opportunists are picked up and charged with something. How dare they attempt such a hoax in the midst of discussions about peoples' future lives.
Posted by catnip at 12:11 pm