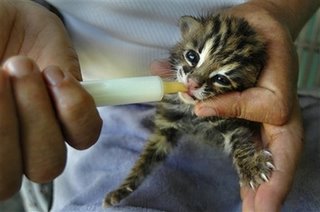 A veterinary doctor feeds Bulu, a three-month-old leopard at the state zoological park in Gauhati, India, Wednesday, Aug. 16, 2006. Bulu is being raised at the zoo after it was rejected by its mother. (AP Photo/Anupam Nath)

I'm pretty sure that photo was not doctored, (unless they photoshopped out his Little Green Helmet). CSI:Bloggerville is on the case as we speak...

A grossly intoxicated man presented himself at the front door of the detachment one night this week. He demanded that members attend to a party he had just left and to employ their batons and pepper spray on another guest whom, he complained had insulted him. When a member explained that there are some rather explicitly defined criterion to be met before police can start bludgeoning folks or temporarily blinding them with chemical agents, the man intimated that he would “do it himself” then. As a result, he spent the night in the hope that a spirit of goodwill and forgiveness would accompany his anticipated sobriety or in the alternative that his hangover was so severe that he forgot all about any insults he had suffered several hours earlier.

- Jesus' General writes to Rick Santorum wondering what it might take to get on the Senator's list of favourite blogs.

- Read this and then scroll down to the 'Moral Mailbox' icon on the right. I was fooled. Were you?

"According to reports, Fidel Castro is alert and being briefed. And I'm thinking, why didn't we get a president like that?" --David Letterman
more late-night jokes

- Chocolate news:
Chocolatiers See Image of Virgin Mary
Man Trapped Waist-Deep in Chocolate (Let's hope the Virgin Mary wasn't in there too)
Chocolate Fashion (Watch for it coming soon to a Wal-Mart near you!)
Posted by catnip at 12:25 pm