Britain has raised its terror alert level to darn near Elmo on the news that a threat to blow up planes flying from the UK to the US has been unraveled by Scotland Yard. A US source says 'this is the real deal', according to CNN (just like all of those other 'real deals' that the Homeland Security Department have announced in the past when things were going sideways politically?) 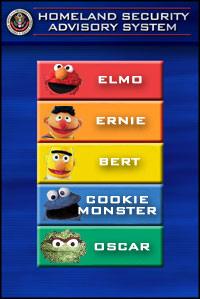 It is thought the plan was to detonate explosive devices smuggled on aircraft in hand luggage.

Police have arrested about 18 people in the London area after an anti-terrorist operation lasting several months.

Security at all airports in the UK has been tightened and delays are expected. MI5 has raised the UK threat level to critical - the highest possible.

According to MI5's website, critical threat level means "an attack is expected imminently and indicates an extremely high level of threat to the UK".

BBC home affairs correspondent Daniel Sandford says he does not think the police believe an attack is imminent.

"The reason for raising the threat level is in case there is some other sub-plot, back-up plot around this that the police aren't aware of," he said.

Okay. It's after midnight as I'm writing this and I admit I'm a bit tired, but still - does that statement make any sense? To anyone?

The Department for Transport set out the details of the security measures at UK airports.

Passengers will not be allowed to take any hand luggage on to any flights in the UK, the department said.

Only the barest essentials - including passports and wallets - will be allowed to be carried on board in transparent plastic bags.

Talk about traveling light! Will there now be a new market opening for transparent luggage? Stay tuned.

Yes, I know it seems that I'm not taking this seriously. It's just that I've seen this so-called terror drama played out too many times since 9/11 and how many actual convictions have there been of these terrorist suspects involved in these alleged plots? Not a helluva lot. And it's no coincidence that these announcements always come at a time when the US administration (and, in this case, the UK and Israeli governments) are suffering from low approval ratings. Distraction from the Israel/Lebanon war anyone?

So, let's wait and see how this plays out or if it is indeed as much as a summer threat as Snakes on a Plane.

Update: Some dude being interviewed on CNN International is already pinning this on al Qaeda. The anchor showed a screen capture of an alert about this situation of the DHS web site but I can't find it there. The British anchor guy asked his security expert dude if this was not indicative of an intelligence failure since the plot got this close to being such a threat to which security expert dude replied, 'that's utter rot, it's a tremendous success!'. They've also banned travelers from taking any liquids on board such as hair gel, mouthwash and whatever else comes in liquid form. (more details here.

And I still can't find Chertoff's statement... DHS will hold a press conference at 8am ET (6am my time) and no, I'm not getting up for that one.

No doubt, Bush will come out in the morning and tell everybody to just go shopping or the terrorists win.

Oh my, CNN's most excitable British correspondent, Richard Quest, is on the story too. He seems so out of his element talking about terrorist threats. He's much better suited to telling stories about the bizarre and obscure habits of the commoners and royals, but his emphatic voice certainly adds an element of hysterics and urgency to all of this.

WASHINGTON Aug 10, 2006 (AP)— The U.S. government raised its threat warning to the highest level for commercial flights from Britain to the United States early Thursday in response to a reported terror plot in London and also stepped up the general level for all flights within the U.S. or entering the country.

"We believe that these arrests (in London) have significantly disrupted the threat, but we cannot be sure that the threat has been entirely eliminated or the plot completely thwarted," said Homeland Security Secretary Michael Chertoff in announcing that the threat level for flights from Britain to the United States has been raised to the highest "severe or red" level.

"To defend further against any remaining threat from this plot, we will also raise the threat level to high, or orange, for all commercial aviation operating in or destined for the United States," Chertoff said.

A statement issued by Chertoff said "currently, there is no indication … of plotting within the United States."
[...]
"Due to the nature of the threat revealed by this investigation, we are prohibiting any liquids, including beverages, hair gels, and lotions from being carried on the airplane."

He said the changes take effect at 4 a.m. local time across the United States and will be undated[sic] as warranted.

And they're still talking about al Qaeda and now 'Muslims' on CNN despite the fact that nothing has yet been revealed about the identities of those arrested.

Update: Ummm...hmmm...my cable and internet went out at 2am so off to bed I went after gathering whatever news I had about this incident at the time.

Then I get up (after sleeping in because I wasn't feeling well) and all hell has broken loose here thanks to Kate at Small Dead Animals (the roadkill site) who asked (about me, dramatically, over at her right-wing site) 'What the hell is wrong with you people?' when she read this post.

Thanks for asking. Here's my answer: not much, really. How about you, Kate? Did you expect me to break into wild hysterics over this news? Yeah. Sorry. Not my style. See: Malkin, Michelle or just read some of the comments left by your roadkill fans in the comments here. It's the end of the world as we know it, according to some of them, even though all that happened was that some people were arrested for allegedly having a plan to blow up airplanes, disrupting air travel and traveling plans. You can choose to live in fear, Kate. I'll stick to living with the facts.

One more thing: For those of you whose heads are exploding over the fact that I chose to question the credibility of these elevated terror alert levels and exposed that they are sometimes used for political purposes, I'll let former DHS head Tom Ridge explain reality. If you still want to believe that every single alert is 'the real deal', talk to him.

WASHINGTON — The Bush administration periodically put the USA on high alert for terrorist attacks even though then-Homeland Security chief Tom Ridge argued there was only flimsy evidence to justify raising the threat level, Ridge now says.

Ridge, who resigned Feb. 1, said Tuesday that he often disagreed with administration officials who wanted to elevate the threat level to orange, or "high" risk of terrorist attack, but was overruled.

His comments at a Washington forum describe spirited debates over terrorist intelligence and provide rare insight into the inner workings of the nation's homeland security apparatus.

Ridge said he wanted to "debunk the myth" that his agency was responsible for repeatedly raising the alert under a color-coded system he unveiled in 2002.

"More often than not we were the least inclined to raise it," Ridge told reporters. "Sometimes we disagreed with the intelligence assessment. Sometimes we thought even if the intelligence was good, you don't necessarily put the country on (alert). ... There were times when some people were really aggressive about raising it, and we said, 'For that?' "

Update: Glenn Greenwald has more about how Republicans/right-wingers are now exploiting this alleged plot for political gain.
Posted by catnip at 12:51 am