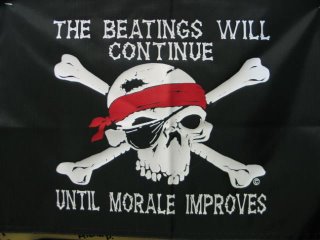 Last week a Winnipeg doctor was kicked off a United Airlines plane for engaging in suspicious activity. Was he acting dearnged? Was he threatening the crew? Was he running up and down the aisle making gorilla noises while pounding his chest? Did he attack someone with his nail clippers?

No. He was praying.

Now who would consider a man saying his prayers suspicious? Well, if you add the fact that the man was a brown-skinned Muslim, it suddenly all makes sense.

Farooq said the allegation came from a passenger who appeared drunk and had previously threatened him during the trip.

When flight personnel were alerted, the 27-year-old radiology resident and two colleagues — a man and a woman — were taken off their flight. They had been returning from a conference in San Francisco.

Farooq said that even officials from the Transportation Security Administration soon realized the flight crew had overreacted, but by the time that conclusion had been reached the trio were forced to stay in Denver for the night and catch a flight the next day — at their own expense.

This is becoming a common occurance, just as driving while black is reason enough for some law enforcement officials to pull over and harass people due to the colour of their skin. The hopes of the American civil rights era are still a long way from being fulfilled.

Martin Luther King's pronouncement for letting freedom ring from every corner of America is consistently blocked by those who choose only to see a person's skin colour as a symbol of their unworthiness. There can be no trust - no way forward - when such blatant prejudices cloud ones ability to honestly scrutinize someone else's actions or character. His dream has not yet met its promise.

To make matters worse, when you have the so-called leader of the free world make stereotypical strawman assertions like this, which only fuel the bigoted fires, the need for civil discourse becomes even more urgent:

Some of the debate really center[sic] around the fact that people don't believe Iraq can be free; that if you're Muslim, or perhaps brown-skinned, you can't be self-governing and free. I strongly disagree with that.
- George W Bush, 2004
link

But, what has been learned by these elected politicians when yet another one, Republican Senator George Allen, feels comfortable in calling an East Indian man a macaca. This is the same party that embraced Jesse Helms' scurrilous attacks against Martin Luther King and who was openly racist while he was in office. And what about Trent Lott's assertion that if former Dixiecrat Strom Thurmond (now deceased) who filibustered civil rights legislation in 1957 had been elected president 'we wouldn't have had all these problems over all these years'?

A while back I had an e-mail exchange with one of my online friends who is a black woman. We'd both been under attack as being anti-American and anti-military at another site. It was through her that I learned that racism had reared its ugly head on a popular left-leaning blogging community. The discussion turned to the concept of safe places. Unfortunately, I concluded, the only truly safe place is in one's mind (if one is fairly mentally stable). External places and relationships do not guarantee 100% safety all of the time as we are often wounded several times over. She also brought up the subject of white privilege - something I had not given much thought to because, due to circumstances in my life, I never really felt privileged. I told her that she had given me something to think about, though I wasn't really quite sure what it was at the time. Well, I see it now.

Although I certainly sympathized with the plight of minorities who have been so horribly attacked by those who refused to see beyond their skin colour, my experience in life was different. As a white woman, of course, I had never faced that type of discrimination. As a French person growing up in western Canada during the time of Pierre Trudeau, however, I often had to defend myself against bigoted slurs.

During most of my school years, I lived in a community dominated by people of Russian, Polish and Ukrainian descent. There was one black family in town and they were well-respected because of their participation in the religious community. The boys of the family were a curiousity more than anything since they were all quite handsome, musically gifted, scholastically superb and very athletic. I must add that their sister was all above and more. She had a great sense of humour and I enoyed her friendship. The family thrived and there was no overt racism directed towards them. They were accepted for what they were - another great family that added much to the community.

Meanwhile though, I was constantly bashed for being French. It was an odd situation, but it taught me exactly what oppression meant. So, 'white privilege' didn't exactly help me there. My ethnicity was the issue. There are, to this day, many in the west have have absolutely no use for French-Canadians but I had decided long ago that I would not let their narrow-minded attitudes affect me. Having survived the insults, I grew stronger and more tolerant and I understood what it felt like to be considered 'less than'. 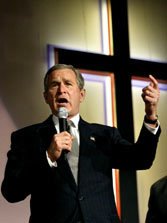 So now, when I still see minorities being abused because they have a different shade of skin or because their religion has been so maligned and misunderstood - despite all efforts to enlist the public in education about what Muslim beliefs are really about, I absolutely cringe when I hear phrases like "Islamo fascist' being uttered by the one man in America, George W Bush, who ought to be acting as an example of the Christian tolerance he purports to believe in. The evangelical leaders who prop him up are no better. Back in 2001, Franklin Graham, the son of Billy Graham and head of Samaritan's Purse, called Islam 'a very evil and wicked religion'. He still believes that, as do other prominent evangelists who address their followers on a mass scale via the media weekly as they engage in the race for a spot in heaven. Is it any wonder then, that Muslims are constantly the targets of racial and bigoted profiling when such powerful leaders have repeatedly scorned them - reinforcing the belief that they are involved in 'suspicious activity' and must therefore be watched closely? It's the modern day quasi-equivalent version of the crusades.

So it appears that some members of the public have now gone beyond the 'driving while black' offense to 'buying cellphones while brown' and 'praying while flying'. 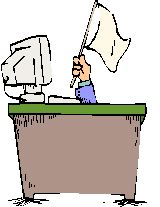 While the major players in the fearosphere have been heartily supporting racial profiling and vile acts like the internment of the Japanese during WWII while urging everybody and their dog to live in terror 24/7 (the terrorists really have won then, haven't they?), those of us who take a more calm and reasoned approach to reality are villified for not hiding under our desks quivering in fear whenever some alleged act of 'evil' like having Vaseline on a plane takes place or is even plotted or thought about.


(pirate flag pic found at Boat Shirt.com)
Posted by catnip at 11:29 am