liberal catnip Gets a Visit From the Pentagon

Back in the spring, my little blog received two visits from CENTCOM. I knew then I had made it on their list of people most likely to be questioned if I ever decided to visit the US again. Thou shalt not criticize the US military machine without consequence.

Today, as a result of posting this piece on Saturday, ' The US Military: A Culture of Sexual Abuse' someone who identified themself as "Call to Duty' left this comment on that thread which is basically the type of thing one would expect from a defender of the military. What 'Call to Duty' failed to do, however, was to identify himself/herself as being someone from within the Pentagon with an HQDA e-mail address whose job it must be to dispense the version of Rumsfeldian Good News™ about what the Pentagon's doing. Further, the details he included in his comment can easily be found in the Associated Press article that I linked to in my piece (minus the obvious propaganda spin, of course). 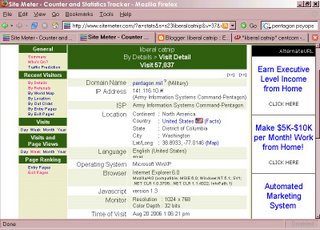 So, 'Call to Duty', here's what I'd like to know: why are you wasting your time visiting small blogs like mine (I'm hardly a 'somewhat popular blogger' like Tbogg) when my reach in the blogosphere is so minute that isn't even on the radar screen? Doesn't the Pentagon have more important activities to focus on like the wars in Iraq and Afghanistan and the so-called Great War on Terrorism? I wonder what American taxpayers, once again, would think about this use of their hard-earned tax dollars. Or, is this all part of your "Information Operations Roadmap"?

Regardless, I'd suggest that you actually check a blogger's reach and stats before you waste your time responding on sites like mine that offer cheesecake as Saturday afternoon fare. Did you grab a slice, btw?

Oh, and I forgot to ask: have you found bin Laden yet?

Update: This person, Call to Duty, found my site via a search at sphere.com. I have notified some other bloggers who've also been visited, where Call to Duty posted the exact same comment as he/she did here, that he/she is posting from the Pentagon. As I noted in the comments here, at least when the guy from CENTCOM commented here in the spring he actually used his real name.

This is just stealth propaganda by the Pentagon which thinks it can do damage control by posting refutations on blogs. Sorry, guys. The facts are the facts. Why don't you focus more on cleaning up the abusive culture in the military that promotes this type of sexual abuse? Get Call to Duty to teach some classes on civility and criminality instead of driveling on online. Once again, you've shown the world just how screwed up your priorities are and how you put more value in trying to brainwash people than on helping those rape victims to actually heal.

You want to post a comment on this blog? How about mea culpa?
Posted by catnip at 2:10 pm