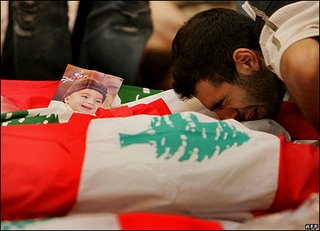 - While diplomats twiddle their thumbs, refusing to stop Israel's aggression against the people of Lebanon, the Israeli government has authorized a broader invasion of Lebanon.

Ministers approved the recommendations of the army and Defense Minister Amir Peretz to allow ground forces to penetrate as far north as the Litani, which stretches across southern Lebanon as far as 30 kilometers (19 miles) from Israel's border, Prime Minister Ehud Olmert's office said in a statement posted on its Web site. The new campaign may take 30 days, Deputy Prime Minister Eli Yishai said.

30 days. Olmert would not go ahead with such a lengthy campaign if he did not have assurances from the United States that it would be unimpeded by a UN resolution. It seems Olmert has learned Bush's tactics quite well: just do whatever you want, despite international opinion, because it seems there will be no real consequences meted out in the end anyway. Witness the results of Bush's illegal war in Iraq. Many world leaders grumble but they know they're powerless to stop the madness, so they sit back and do nothing. Diplomacy is not on the march. Neither is freedom for the Lebanese and Palestinian people.

As Israel intends to muscle its way deeper into Lebanese territory while saying it's simply preparing the way for an international force (of which it will be difficult to gather manpower for anyway) they can then claim that they have the situation under control in southern Lebanon. Occupation by any other name is still occupation and Israel's disdain for UN peacekeeping missions is already well known.

- Ha'aretz has a roundup of which countries might or might not participate in a UN force. (Canada is not even mentioned).

- Meanwhile, the Arab League is warning that a civil war could break out in Lebanon. (This is sounding more and more like Iraq every day).

- If you're interested in following the situation on the ground through the eyes of some MSM reporters who have blogs, here are three choices:

- One of the more outstanding journalists covering the war is Robert Fisk. You can read his dispatches here.

- Via AP: While thousands of Lebanese are stranded without access to aid from humanitarian groups, Israeli is offering to pays its citizens to evacuate parts of Israel:

NAHARIYA, Israel - For the first time, Israel's government offered Tuesday to foot the bill for thousands of residents who want to flee a war zone, but it was careful to avoid using the word "evacuation."

When Iraqi rockets hit Tel Aviv in the 1991 Gulf War, the city's mayor mocked those who fled as "deserters." But a month of war and thousands of Hezbollah rockets appear to have ended that stigma.

More than 300,000 residents of northern Israel already have left the region — which has been pummeled by thousands of Hezbollah rockets — and are staying in hotels or with relatives farther south. Most of those who remain in the danger zone are poor, infirm or elderly, who have nowhere to go or no way to leave.

The government said Tuesday that it was taking action to help some of those in the north, saying they will be brought south for "refreshment." Under the plan, the government would pay for four-day holidays for 12,000 northerners and rent out 2,000 hotel rooms indefinitely for residents' use.

Update: The UN Human Rights Council will meet on Friday to consider a statement condemning Israel:

A letter calling for the session presented by Tunisia on behalf of 16 nations said the 47-member body should take action "on the gross human rights violations by Israel in Lebanon" including "country-wide targeting of innocent civilians".

Apart from Muslim states on the council like Algeria, Bangladesh, Indonesia, Jordan, Malaysia, Morocco and Pakistan, the request was also supported by Russia, China and South Africa.
[...]
Since the bloodshed began, at least 1,005 people in Lebanon and 101 Israelis have been killed.

The U.N. Council, launched in June to replace the widely criticised human rights commission, has no enforcement powers. It aims to exert moral pressure on countries it deems to be violating U.N. accords.

Decisions can be approved by majority vote. Neither Israel nor its main backer, the United States, have seats on the Council.