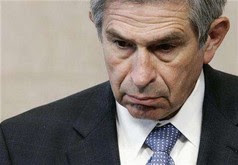 Oh, how nasty those neocons get when they use very bad judgment and get called on it:

An angry and bitter Paul Wolfowitz poured abuse and threatened retaliations on senior World Bank staff if his orders for pay rises and promotions for his partner were revealed, according to new details published last night.

Under fire for the lavish package given to Shaha Riza, a World Bank employee and Mr Wolfowitz's girlfriend when he became president, an official investigation into the controversy has found that Mr Wolfowitz broke bank rules and violated his own contract – setting off a struggle between US and European governments over Mr Wolfowitz's future.

Sounding more like a cast member of the Sopranos than an international leader, in testimony by one key witness Mr Wolfowitz declares: "If they fuck with me or Shaha, I have enough on them to fuck them too."

Cheney, a well-known fan of the f-word, praised his buddy's bad behaviour:

Yesterday vice president Dick Cheney defended Mr Wolfowitz, saying: "Paul is one of the most able public servants I've ever known .... I think he's a very good president of the World Bank, and I hope he will be able to continue."