Just do the right thing...

I rarely write about celebrity issues, but this story about my favourite painter bothers me.

SAN FRANCISCO, California (Reuters) -- Actress Elizabeth Taylor can keep a Van Gogh painting that might have been illegally seized by the Nazis because the family who once owned it waited too long to ask for it back, a U.S. appeals court ruled on Friday.

The painting, made by van Gogh near the end of his life, is worth many times more in today's red-hot art market.

The Orkin family, South African and Canadian descendants of Margarete Mauthner, a Jewish woman who fled Germany in 1939, sued Taylor in 2004, claiming that the work had been confiscated by the Nazis and should be returned to them under the 1998 U.S. Holocaust Victims Redress Act.
[...]
In their decision, a three-judge panel of the U.S. 9th Circuit Court of Appeals backed a lower court and ruled the Orkin family waited too long in claiming the painting that was long known to be in Taylor's possession.

There are times when the law should be set aside (not by the courts, but by the defendant involved at least) so that true justice can occur - especially in this case when a person like Elizabeth Taylor, whose net worth must be astounding and who obviously does not need the money, could have chosen to return the painting to its rightful owners who lost it through such horrendous circumstances. 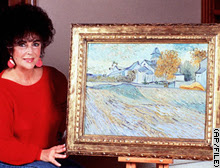 "Vincent van Gogh is said to have reflected that 'paintings have a life of their own that derives from the painter's soul,' " Thomas wrote. "The confused and perhaps turbulent history of his painting 'Vue de l'Asile et de la Chapelle de Saint-Remy' may prove the truth of his observation."

It's also ironic that the title of the painting is "View of the Asylum..." considering the crazed love of money that so permeates our society.

And reality, in this instance, is that the picture was worth more than the justice to Ms Taylor.