British artist Mark Wallinger is on the shortlist for the Turner prize in Britain - not for painting landscapes or sculpting a masterpiece, but for recreating one man's 5 year protest against the Iraq war. 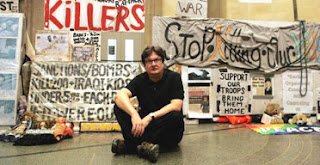 The barricades came down yesterday morning, when the temporary walls obscuring Mark Wallinger's State Britain were finally removed. Running the length of the central spine of Tate Britain is a near-perfect, life-sized replica of the one-man camp that peace campaigner Brian Haw occupied on Parliament Square between June 2001, when he first began his protest against the economic sanctions imposed on Iraq, and the night in May 2006 when the police removed almost the entirety of Haw's belongings.

In between, the twin towers fell, Afghanistan was invaded, and sanctions against Iraq turned into occupation and civil war. London and Madrid were bombed, and the 2005 Serious Organised Crime and Police Act was passed, forbidding any unauthorised protests within a kilometre of Parliament Square. It was said that terrorists might use protests such as Haw's as a cover for their activities - though it appeared to have been designed principally to move Haw on.

Over the years, Haw's public protest opposite the Houses of Parliament grew to become a rambling, gap-toothed, 40-metre-long wall of banners, placards, rickety, knocked-together information boards, handmade signs and satirical slogans. Banksy donated a big painting of soldiers. Sun-bleached rainbow peace flags flapped overhead. The placards declaimed "You Lie Kids Die BLIAR" and "Christ Is Risen Indeed!". Road-spattered appeals to motorists to "Beep For Brian" stood beside an accumulation of material that could only be read or understood close-up. Photocopied warzone reports, commemorative crosses, entreaties and signs that have crept in from other people's protests - "Pensioners want a slice of the cake, not crumbs" - compete, and an estate agent's board has even found its way amongst the piles of stuff on the far side of Haw's placards, the accumulation of a near-five-year tenure.

Lovingly copied and recreated, this has all made its way into Wallinger's work. All that is missing is the indomitable Haw himself, with his megaphone and his badge-encrusted floppy hat. He is still camped on the grass opposite parliament, but now occupying only a fraction of the space he once had. A few days before Haw's stuff was all taken away, Wallinger took hundreds of photographs of the entire, splendidly ramshackle, ranting, unmissable eyesore on which he based his reconstruction. Here is an impromptu, cobbled-together monument to a "fallen comrade", constructed from a plastic traffic cone, several lengths of taped-together garden cane and a homemade flag. There, a group of dolls in Victorian dresses is lying beside a plastic baby with missing arms and legs, bloodied with paint. Mutilated soft toys, placard-waving and card-carrying teddy bears - bears against bombs, bears saying "too much to bear" - and soft toys piled in a paper coffin.

You can see a slideshow presentation here.

A wonderful tribute to one man's dedication to peace.

Brian Haw also has his own site and Wiki has the condensed version of his struggles.