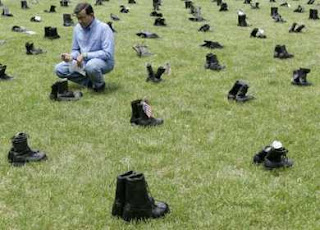 Inayat Khan, of Indiana, looks at a pair of boots belonging to his cousin Captain Humayun Khan, which are part of "Eyes Wide Open: An Exhibition on the Human Cost of the Iraq War" in Chicago, May 25, 2007. More than 3,400 pairs of combat boots, one pair for every U.S. soldier killed in the Iraq War, were on display.

And just imagine if someone took on the task of also displaying the boots, shoes, sandals and baby booties of the hundreds of thousands of Iraqis killed during this occupation as well...