Police are on the scene at Calgary's City Hall where an armed man who possibly has explosives as well is holed up.

A man with a weapon — and possibly explosives — is inside Calgary's city hall, police said Saturday.

Any people who were in the building have left. There are no hostages.

The incident began about 4 p.m. on Saturday afternoon when police say they received a report of a bomb threat.

A large area around the building has been blocked off.

Police said the man is inside the main lobby, and that they have called a negotiator. 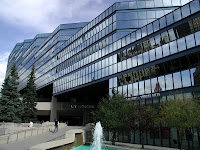 This type of situation is truly a rarity in a city like Calgary.

7:30 pm - No word from the police on the suspect's identity, his demands or what's happening at this point. The C-Train has been ordered to bypass the City Hall stop and an adjoining medical clinic was also evacuated earlier. Luckily, the main Calgary Police Station is right across the street from City Hall so they, no doubt, were on the scene within minutes of being alerted.

A least 20 people, some who were working inside the municipal building and others who were attending a child care orientation class were evacuated.

“It was pretty scary. It’s not something you expect. My mind just went blank. I freaked out, you just know you have to get out as fast as possible and not question it,” said Devon Leroux, 23. People inside were told the person was carrying explosives. Others inside of a child-care orientation class heard a banging shortly before the evacuation.

“There was a guy — he was taking one of those fold-up chairs and pounding it against the door of council chambers,” said Bonnie LeWin.

“Then they just said we have to evacuate the building. I couldn’t see a face (of the threatening man). It was just such a rush.”

Police confirmed the man inside did have a handgun and threatened to be carrying explosives.

Will update as more news is released.

Update: 8:30 pm via QR77 radio - the standoff is over. Police have taken a man "dressed in black and wearing jeans" out of City Hall in handcuffs. The suspect's name has not been released and the situation apparently ended without incident.

Related:
City of Calgary site
CTV Calgary - CFCN
QR77 - AM talk radio (listen live at the top and bottom of the hour for updates)
CBC Calgary