Yes, it's a snow day here in Calgary but, as usual, wait 5 minutes and the weather's sure to change. 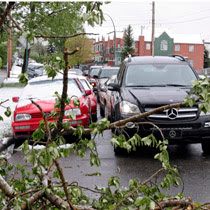 And in news that would be of interest to bear-hating Stephen Colbert: Woman fights off bear in South Glenmore Park. That's in the city of Calgary.

Police and Fish and Wildlife officers are searching for a bear in South Glenmore Park following a close encounter with a couple on Thursday afternoon.

Police duty Insp. Dale Flemming said the woman used a tree branch to defend herself against the animal believed to be a black bear.

STARS air ambulance, fire crews and paramedics were also on scene to assist.
Flemming likened the encounter to a game of cat and mouse but said no physical contact was made by the bear. Police are warning Calgarians to stay out of the park until the search is called off.

Cat and mouse? That sure was one huge cat!

What's happening in your neck of the woods?

Update: 5:15 pm ET - the house debate on the Iraq funding bill has begun. Joe Biden has jumped into Bush's lap to support it:

Biden was alone among the potential Democratic candidates in immediately pledging his support for the bill.

John Murtha, speaking on the floor, has said he'll vote for it as well.