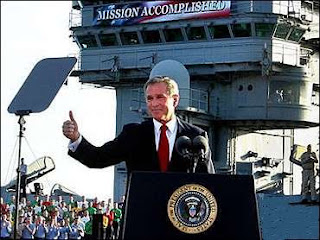 The Battle of Iraq is one victory in a war on terror that began on September the 11th, 2001, and still goes on. That terrible morning, 19 evil men — the shock troops of a hateful ideology — gave America and the civilized world a glimpse of their ambitions. They imagined, in the words of one terrorist, that September the 11th would be the "beginning of the end of America." By seeking to turn our cities into killing fields, terrorists and their allies believed that they could destroy this nation's resolve, and force our retreat from the world. They have failed.

In the Battle of Afghanistan, we destroyed the Taliban, many terrorists, and the camps where they trained. We continue to help the Afghan people lay roads, restore hospitals, and educate all of their children. Yet we also have dangerous work to complete. As I speak, a special operations task force, led by the 82nd Airborne, is on the trail of the terrorists, and those who seek to undermine the free government of Afghanistan. America and our coalition will finish what we have begun.

From Pakistan to the Philippines to the Horn of Africa, we are hunting down al-Qaida killers. Nineteen months ago, I pledged that the terrorists would not escape the patient justice of the United States. And as of tonight, nearly one-half of al-Qaida's senior operatives have been captured or killed.

The liberation of Iraq is a crucial advance in the campaign against terror. We have removed an ally of al-Qaida, and cut off a source of terrorist funding. And this much is certain: No terrorist network will gain weapons of mass destruction from the Iraqi regime, because the regime is no more.

In these 19 months that changed the world, our actions have been focused, and deliberate, and proportionate to the offense. We have not forgotten the victims of September the 11th — the last phone calls, the cold murder of children, the searches in the rubble. With those attacks, the terrorists and their supporters declared war on the United States. And war is what they got.

War is what they got.