Time Magazine has named its 100 most influential people of 2006 and Canada's Maher Arar is among them in the "Heroes and Pioneers" section.

Vermont Democratic senator Patrick Leahy, who has championed Arar's cause writes for Time: 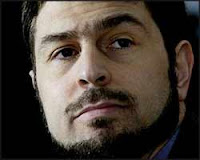 Sending a Canadian technology consultant to be confined in a gravelike cell and tortured did nothing to make Americans safer. A Syrian-born Canadian citizen, Maher Arar, 36, was returning home from a vacation in September 2002 when U.S. federal agents detained him in New York City on suspicion of ties to terrorism. Rather than send him to his home and our close ally, Canada, for interrogation, the U.S. government sent him to Syria, a nation with a history of engaging in torture. A year later he was released. Three years later a Canadian commission found no evidence that Arar had any terrorist connection. The commission also concluded that he was systematically tortured and held under horrendous conditions.

The Bush Administration refuses to acknowledge any responsibility, instead offering the tepid explanation that Syrian officials assured the U.S. that Arar would not be tortured. These are the same Syrian officials with whom our government now says it will not negotiate because they are not trustworthy. Maher Arar's case stands as a sad example of how we have been too willing to sacrifice our core principles to overarching government power in the name of security, when doing so only undermines the principles we stand for and makes us less safe.

Mr Arar responded saying 'he is "very honored" by the distinction, and thanked his supporters during his "struggle for justice." Although his lawsuit against the US government has been dismissed on the grounds of "national security", his lawyers are mounting an appeal.

OTTAWA -- One of Canada's most respected judges yesterday formed a united front with Maher Arar aimed at lifting a veil of government secrecy around 1,500 words censored from last fall's report into possible Canadian government complicity in Syrian torture.

Counsel acting for Mr. Justice Dennis O'Connor, the author of last fall's more than 800-page report on the Maher Arar affair, yesterday tried to persuade Federal Court Judge Simon Noël to force the government to reveal censored portions of the report. The public is still not allowed to see the blacked-out portion of the report, not even after a $15-million public inquiry that lasted more than three years.

Justice Department lawyers, who argue the government was hardly heavy-handed with its censor's pen, say that it is Ottawa's prerogative to shield portions of inquiry findings for security reasons. Crown lawyer Alain Préfontaine said that fewer than 1,500 words, or less than one half of 1 per cent of the overall Arar Inquiry report, have been censored.

He argued that Canadians need to know the entirety of the judge's report to have faith in government and to keep it accountable.

"The public demands to know what happened, why it happened," Mr. Cavalluzzo argued.

Some of the language surrounding the censored parts of the report appears to indicate that Judge O'Connor might believe that untested intelligence, possibly derived from the torture of a Canadian truck driver then held in the Middle East, may have found its way into RCMP search warrants in early 2002.

(The truck driver, Ahmad El Maati, is a former Afghanistan-based mujahed [holy warrior] who says he was tortured into naming other Canadians, and to being forced to confess to being behind a fake al-Qaeda bomb plot in Ottawa.

The full text of the search warrants has never been revealed.

There are still many unanswered questions on both sides of the border that, most likely, we'll never know the answers to.

Mr Arar's name surfaced again in parliament this past week during the debates about the allegations of torture launched by several Afghan citizens who had been turned over by Canadian troops to Afghan authorities for imprisonment. Public Safety minister Stockwell Day repeatedly, without any conclusive investigation (many of which are now underway), referred to those claims as being "false". This is the same Day who, in 2002, accused Arar of having possible terrorist ties in parliament. Day was reminded by opposition members that his propensity for jumping to conclusions serves absolutely no one but himself and his party hacks, from the PM on down, who are now using the false equivalency argument that torture allegations are undermining Canadian troops when what's really demeaning to our soldiers is the fact that these conservatives are trying to blow off serious claims by calling all of the individuals involved members of the Taliban (when they don't even know if that's true), seemingly making it okay then to somehow justify their possible torture and diminish their status as human beings with rights.

They did that with Mr Arar too. You'd think that experience would have taught them something.

Mr Arar's inclusion in the "Heroes and Pioneers" section of Time magazine's 100 Most Influential People issue ought to be a very sobering reminder to all (and that includes you, George Tenet) that the use of torture is never justified and that every single case involves a person who does not deserve to be proclaimed guilty before being proved innocent. Far too many victims are never heard from. How many have died? How many are still in secret prisons around the world?

Mr Arar is a symbol for all of the wrongfully accused that have been subject to severe abuse as a result of the overwhelming fearmongering and paranoia that so permeates our societies today thanks to an atmosphere of panic and the unwillingness of those in authority to see past the otherness of people who they believe fit their criminal profiles as defined by their skin colour, religion, political affiliations or beliefs.

During the 40s and 50s, it was the "commies". The 60s and 70s brought attacks against hippies and the anti-Vietnam crowd. The 80s - communists again. And now it's anyone deemed to be a possible "terrorist". There are always people who must be viewed as being less than in order to rationalize their treatment as sub-human subversives by those with the power to demean them. Meanwhile, the lives of countless innocent people are destroyed and sacrificed in order to "protect" the many. Funny though, that when asked for real evidence that the ends really did justify the means, that information is "top secret". In other words, the failure rate and the waste of lives is too high to admit.

Mr Arar lived through his horrendous experience. Who's dying, who's being tortured as we speak today? And who's doing something about it?