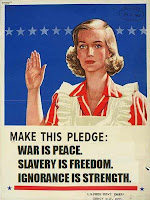 And so it comes full circle. We really are living in Orwell's 1984 (if there was ever any doubt).

House and Senate lawmakers gathered today in the Capitol Rotunda to remember and pay tribute to U.S. Soldiers who've served in Iraq and Afghanistan. The half-hour ceremony was complete with the Presentation of Colors by the United States Armed Forces Color Guard and the National Anthem sung by a local Washington, D.C., high school student. The front row was reserved for service members who were wounded in Iraq and Afghanistan.

House Speaker Nancy Pelosi, Minority Leader John Boehner, Senate majority leader Harry Reid and Minority Leader Mitch McConnell all did their best to put political differences aside to focus on the members of the military serving all over the world. The sharp words normally slung about a failed war in Iraq were avoided.

Reid urged members of the audience to not forget the men and women serving in Afghanistan saying they are in out hearts and in our prayers. McConnell acknowledged that the past five years have not been easy, but urged the audience to remember that "the purpose of war is peace." Pelosi spoke of creating a peaceful future worthy of members of the military and their sacrifice.

After a closing prayer by the House chaplain, the ceremony broke up with the U.S. Marine Band Brass Quintet playing God Bless America.

The purpose of war is war. Only a deluded fool would think otherwise.

You are not going to get peace with millions of armed men. The chariot of peace cannot advance over a road littered with cannon.
~David Lloyd George

h/t Madman in the Marketplace