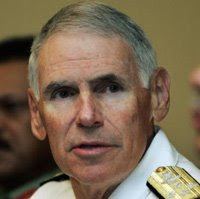 Recent press reports suggesting a disconnect between my views and the President’s policy objectives have become a distraction at a critical time and hamper efforts in the CENTCOM region,” Fallon said in a written statement.

“And although I don’t believe there have ever been any differences about the objectives of our policy in the Central Command Area of Responsibility, the simple perception that there is makes it difficult for me to effectively serve America’s interests there.” Fallon’s statement read. “I have therefore concluded that it would be best to step aside and allow the Secretary and our military leaders to move beyond this distraction… and focus on the achievement of our strategic objectives in the region. I have submitted my request to retire to the Secretary of Defense.”

The "recent press reports" Fallon is referring to have to do with this article that appeared in Esquire magazine.

Although that profile makes it seem as if Fallon was the only military man publicly disagreeing with the White House saber rattling about Iran, SecDef Robert Gates and the chair of the Joint Chiefs of staff have also advocated diplomacy and Fallon's quotes in Esquire don't appear to make him out to be a peacemonger either:

Fallon is in no hurry to call Iran's hand on the nuclear question. He is as patient as the White House is impatient, as methodical as President Bush is mercurial, and simply has, as one aide put it, "other bright ideas about the region." Fallon is even more direct: In a part of the world with "five or six pots boiling over, our nation can't afford to be mesmerized by one problem."

And if it comes to war?

"Get serious," the admiral says. "These guys are ants. When the time comes, you crush them."

I think the bottom line is that Fallon was simply seen as being expendable and that he was pressured to resign. Surely, he could have just come out and clarified what appeared in the Esquire article while continuing in his role as CENTCOM commander, thus making this "distraction" yesterday's news.

When Gates was asked during today's press conference whether this resignation meant that war with Iran is on, he dismissed that assertion as being "ridiculous". We'll see, I suppose.