catnip has left the building...

...and has moved into another one.

Well, as I told everyone at the beginning of April, the time had come for a new transition in my life - time to find a new place to live. I moved on Saturday and I'm now working on getting settled in.

After I added the Paypal donation button to my site, I was overwhelmed and very humbled by the generosity of the people who responded. You came through for me and everything fell together within about one week. So, the past couple of weeks have been absolutely frantic - sorting, packing and finally moving. I couldn't have done it without all of you who gave me lots of love and support.

I was also very fortunate to find movers who help out the "less fortunate" and who mainly focus on helping new Canadian immigrants (which I'm not). As a result, I was able to donate a lot of stuff (clothes, linens, furniture, books etc.) to their cause which they took when they moved me. The 2 men who run that service, Al & Al, do it on their own and find people to assist via word of mouth in their extended community. I had posted a request for affordable movers on a Yahoo group and Al #1 responded immediately when he saw that I was ill and on permanent disability.

The other Al had the truck, which he bought specifically for the charitable work they do, and hired a couple of homeless guys to do the moving. That was an added bonus since I used to work with the homeless and was really glad that the money I received via my Paypal donations would go to people in need. I also had enough money to give them both tips after they did a great job. The actual moving costs were unbelievably cheap compared to what I would have faced in the real market - enough for the guys and to cover the gas. The 2 Als don't take any overhead above that and they're both really great guys as well - very friendly and caring.

All in all, I'm very grateful for the way this has worked out. I certainly don't see myself as being "less fortunate" considering how incredibly lucky I've been since I was also able to help others through this experience.

Time to unpack and get organized. At least that won't require as much of a rush as the pre-moving period did. That was rough. Now I can relax a bit - as can my cats who are slowing adjusting. They've been troopers through all of this and they thank you too.

The new shared place is quiet and comfortable and the people are welcoming and friendly. I feel like I could sleep for about 3 days and my body's a hurting unit but my stress level has definitely decreased.

A huge Thank you!!! to all of you and, as I promised, here's cheesecake for everyone. 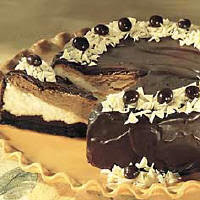 A heartfelt thank you to Kelly as well, without whom I couldn't have gotten through this. Love and hugs...

One more thing: If you live in the Calgary area and have good, usable stuff you'd like to donate to the 2 Als, e-mail me and I'll put you in touch with them. The 2 Als were also instrumental in setting up a new school in Pakistan and they work with Afghan refugees. I've offered to share the stories of any who are interested in telling me about their experiences. Stay tuned.

Email ThisBlogThis!Share to TwitterShare to FacebookShare to Pinterest
Labels: personal, thanks