Attorney General Alberto Gonzales (or, as I like to call him: the smirking asshole from hell) will be testifying before the senate judiciary committee on Tuesday. You can catch it live online on CSPAN.

Earlier this month, we learned that Gonzales was busy practicing his testimony for what he had referred to as an "overblown personnel matter." On the weekend, he put that practice to the test in a Washington Post editorial in which he declared he did "nothing improper" and has "nothing to hide". I imagine he actually believes that. Many people don't, however.

In what could prove an embarrassing new setback for embattled Attorney General Alberto Gonzales on the eve of his testimony before the Senate Judiciary Committee, a group of influential conservatives and longtime Bush supporters has written a letter to the White House to call for his resignation.

The two-page letter, written on stationery of the American Freedom Agenda, a recently formed body designed to promote conservative legal principles, is blunt. Addressed to both Bush and Gonzales, it goes well beyond the U.S. attorneys controversy and details other alleged failings by Gonzales. "Mr. Gonzales has presided over an unprecedented crippling of the Constitution's time-honored checks and balances," it declares. "He has brought rule of law into disrepute, and debased honesty as the coin of the realm." Alluding to ongoing scandal, it notes: "He has engendered the suspicion that partisan politics trumps evenhanded law enforcement in the Department of Justice."

The letter concludes by saying, "Attorney General Gonzales has proven an unsuitable steward of the law and should resign for the good of the country... The President should accept the resignation, and set a standard to which the wise and honest might repair in nominating a successor..." It is the first public demand by a group of conservatives for Gonzales' firing. Signatories to the letter include Bruce Fein, a former senior official in the Reagan Justice Department, who has worked frequently with current Administration and the Republican National Committee to promote Bush's court nominees; David Keene, chairman of the influential American Conservative Union, one of the nation's oldest and largest grassroots conservative groups, Richard Viguerie, a well-known GOP direct mail expert and fundraiser, Bob Barr, the former Republican congressman from Georgia and free speech advocate, as well as John Whitehead, head of the Rutherford Institute, a conservative non-forit[sic] active in fighting for what it calls religious freedoms.

I don't recall any of these "influential conservatives" calling for Gonzales' resignation after they found out that he wrote a legal opinion for Bush justifying torture. It seems this episode has proved to be sufficiently embarassing though that they felt the need to act. Twisted principles. What else is new?

Update: From the "guess who's reading this post?" file. It's the US Department of Justice. 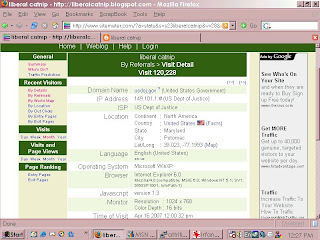 You'd think that people at the DoJ would have something better to do today besides reading blog posts about their boss, considering that the biggest school massacre in US history happened this morning.

Update: Gonzales's testimony has been postponed until Thursday.