Poor Stockwell Day. The man just can't get a break and repeatedly embarasses himself. It must just suck to be him.

HALIFAX — The Canadian government Wednesday refused to explain why it was believed that a Cyprus-registered container ship bound for Halifax was carrying hundreds of stowaways.

In a hastily called news conference in Halifax, Public Safety Minister Stockwell Day said that despite intelligence, no stowaways or contraband were found on the ship that was escorted into the harbour Tuesday afternoon.
[...]
Canadian authorities in Spain received a tip more than a week ago after the ship departed from Lisbon that as many as 200 stowaways were on board, hidden in containers or elsewhere on the 179-metre-long vessel. They searched the vessel late into Tuesday night.
[...]
Mr. Day came to Halifax specifically to witness the arrival and search of the ship.

Imagine...the ship is being searched...suddenly the stowaways are found...Day pulls up on his trusty Seadoo looking dandy in his skintight spandex to...umm...save the day... in true 007 style...planning to hook up some of the stowaways to water skis to tow them back to shore...awesome...just picture that photo op... 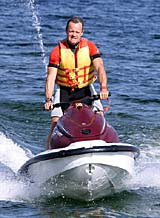 Alas, it was not to be. Darn non-existent stowaways! How dare they steal his shining moment? Unconscionable...

You'll get 'em next time, Stockwell. Next time...