Stockwell Day May Heart Terrorists Too!

In an online CBC story about Liberal reactions to Jason Kenney's tete a tete with the MEK, you'll find this little paragraph at the very end:

Public Safety Minister Stockwell Day reportedly sent his best wishes to the Iranian group ahead of a rally they held in Paris.

Let's hope someone has a copy or tape of those "best wishes" he allegedly sent. If this is true, Day ought to be joining Kenney on that plate of toast while hoping that at least dogs will still love him. 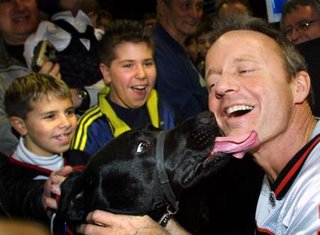 Update: It gets better. Day railed against adding the MEK to Canada's list of banned entities:

Conservative Foreign Affairs critic Stockwell Day said the group, also known as MEK, has confined its attacks to military and regime targets and that Public Security Minister Anne McLellan has twisted the meaning of the word "terrorism."

"She's using harsher language against the MEK than the government has used against the rape, torture and murder of Zahra Kazemi. It's bizarre and it looks like appeasement of a repressive regime."

Day says the timing of the announcement, just 48 hours after Iran told Canada to stop interfering in their investigation of the Kazemi case, will be interpreted by Tehran as a capitulation.

He questioned why a group that has existed for 40 years should only become terrorist now nearly two years after it announced it was laying down its arms.

"The timing and the intelligence around this is strange to say the least."