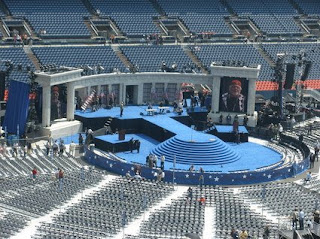 pic borrowed from The Swamp. I hope they don't mind.

Sitting in the stand of the sports arena, waiting for the show to begin.
Red lights, green lights, strawberry wine, a good friend of mine
follows the stars, Venus and Mars are alright tonight.
[...]
If there's a rock show at the Concertgebow, they've got long hair at the Madison Square, you've got rock and roll at the Hollywood Bowl, we'll be there, oo yeah.

"One of the great strengths of this campaign from the very beginning has been the cohesion, the sense of camaraderie, and the lack of drama," said David Axelrod, a leader of the no-drama movement with his casual wardrobe and low-key demeanor.

“I know that Senator McCain and his people are shooting barbs on the opulence of our convention from the mountaintop in Sedona from the McCain estate,” said David Axelrod, the campaign’s chief strategist. “I don’t think it warrants a response.”

If you're one of those "working class" Americans Obama and the Democrats claim to champion and you just lost your home due to foreclosure while watching banks being bailed out; if you desperately need health care or can no longer afford to feed your kids with the proper nutrition they need to thrive; if you scrimped to send $10 to Obama as a campaign contribution; if you can't afford to buy gas; if you're still struggling from the damage Hurricane Katrina and so many other natural disasters have caused; if your job has been outsourced; if your utility bills are making your financial life unmanageable; if you truly want an end to war (all wars); are you going to watch this Rock Show tonite (and it will be a rock show including performers like Sheryl Crow and Stevie Wonder) on a stage built with Roman or Greco styled-columns made to reflect the opulence of we're not sure exactly what because the Obama campaign isn't offering any clues feeling like Obama's speaking for or to you?

One would think that if your candidate has been tagged as being elitist and arrogant, the first thing he'd want to do is to reflect the common man in this historically important acceptance speech. Instead, the Obama campaign has decided to stretch the limits of grandeur to epic proportions. Is this what MLK Jr. would have wanted on the anniversary of his "I Have a Dream" speech from which Obama borrowed his "fierce urgency of now" rhetoric?

There's pride and then there's gratitude with humility.

To the most hopelessly besotted Obamites, their candidate's speech on Thursday will herald a crack in time, after which posterity will speak of Before-Obama (BO) and After-Obama (AO) eras, and the transcendental Age of Obama.

Having conjured up a nonexistent "mass movement" to describe what is actually a corporate financed and directed electoral campaign that has not championed a single issue worthy of historical note (don't dare cite partial Iraq withdrawal and for-profit health care schemes), the Democrats now patch Dr. King's speech into the prologue to the Book of Obama for the purpose of consigning real mass agitation strategies to the past, for all time.

Yet, the unedited version of history - the real deal - commemorates another imminent anniversary, one that starkly illuminates the true political character of the age: Katrina.

Perhaps the timing of the ironically named tropical storm Gustav (which means "staff of the gods") is a cosmic reminder of sorts of the continuing inequality Glen Ford writes about. Obama certainly hasn't and will not claim that his nomination is the be all and end all of the civil rights movement - it is merely one step ahead on a very long road - but neither has he promised much in recognition of what the African-American community still sorely needs. He's "post-racial", you see. But I'll leave that analysis to the experts at BAR. They're much more qualified than I am to dissect the mood among what is definitely not a monolithic AA voice - and they do it well.

What I do know is this: if those are indeed Roman columns, that symbolism is all too fitting for a nation whose stint as a empire is crumbling under the weight of its hubris - and that hubris is not limited only the Republicans. Both parties have created this monster and neither is willing to take full responsibility for it and the Democrats refuse to hold the Bush administration responsible for its crimes in furtherance of that empire.

So, the American people are left to literally clean up the mess and you don't do that by simply showing up at a voting booth in November, hoping you've picked the best new emperor. You change the system from the ground up and you don't rely on a president or congress to do what you want them to. How often does the voting public need to be let down to figure that out? Is it any wonder congress has a 9% approval rating? And, yet, 2 senators are the presidential candidates both promising "change"? Does that make any sense?

Change happens when citizens make it happen. That's why real, on the ground movements are absolutely critical. In an era of big government trashing human and civil rights (with both parties enabling the police state), the voices of opposition to the entrenched, corrupted government are even more important. Where are they? They're out there, if you know where to look. Sending your hard-earned $10 to the Democrats is not an answer. How much of one of those columns did your $10 buy? Is that what you wanted?

And, if those Mile High Stadium columns are in fact Greco-inspired, can there be a more obvious statement of god(s)-like power about to descend from on high? Holy Mother of Zeus. Greece - the birthplace of democracy. Plato must be rolling over in his grave as Obama tries to sell himself as a philosopher king.

When a close circle of his top advisers presented Mr. Obama with $6 million plans to move his acceptance speech to the football stadium in early July, the candidate asked one question, said Anita Dunn, a senior strategist: “Will it rain?”