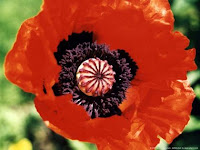 On this day of remembrance, the fact that the simple poppy is symbolic of those who have fought and died in wars on behalf of our country brings my mind to the absolute failure of US and NATO forces to control the poppy crop in Afghanistan, resulting in an economy totally fueled by war lords, drug money, corruption, terrorism, and fear that continues to put our soldiers there at risk - not to mention the Afghan people, of course.

And the question, as always, is: for what? To create an Afghanistan in the image of the United States - a sort of quasi-reenactment of the Genesis in the bible? The idea that the so-called godly figure in the world (or so many of its citizens perceive it to be) can replicate itself around the world without consequence is absurd. Even the God of the bible knew that the free will inherent in his/her creations would doom them to lives of turmoil. Thus, The Crusader (Bush) is reaping what he has sown.

But he's not the only person affected and that's where we, as citizens of a country involved in this reformation of Afghanistan need to take a long, hard look at what we are willing to sacrifice, how long we are willing to do so, how our actions affect the Afghans and ourselves and what we eventually expect as a result of our presence there to determine exactly how realistically our ideals meet the reality on the ground. And I think, as polls have shown, that the majority of Canadians have concluded that the idea that we are there in some sort of humanitarian role (which most would likely prefer) no longer rings true.

Along with reconstruction efforts marred by the continual instability, our forces have unfortunately been involved in killing innocent civilians, handing over POWs to US and Afghan authorities who have tortured or disappeared them, and our country has lost a portion of its 'good will' reputation as a result.

And, as Pakistan becomes less stable with Musharraf now freeing Taliban militants who will no doubt go back and rejoin the fight in Afghanistan while Mush's military is busy rounding up non-threatening lawyers and civil rights advocates to replace the terrorists who had been jailed (not to mention the real possibility of Pakistan's nukes now falling into the wrong hands), what we should be seriously considering on this day of remembrance is just how many more of our soldiers we're willing to lose in an increasingly unwinnable war.

We always say that they're fighting for our freedom. That may have been true in past wars. In Afghanistan? I don't think so.

I am antiwar. That does not mean, however, that I have no regard for those who fight and die. In fact, because I prefer non-violent means to deal with conflicts, my concern for those on the battlefield is amplified. As with the illegal war in Iraq, the mantra about Afghanistan's fate has been that the only viable solution is political, not military.

Have we, as a nation, done everything we can to push for the political compromise to bring peace to Afghanistan or are we too busy practicing Bush's failed policy of 'clear and hold' ie. rooting out (killing) 'militants' and hoping they won't reemerge to grab power again?

Consider the poppies and you'll have your answer.

Bring our troops home. Just how many more do we have to mourn?

Staff at the British embassy in Kabul are wearing poppies in honour of the country's dead in Afghanistan, as well as the other conflicts in which British soldiers have fought over the past century. But Afghans do not understand the meaning of the symbol.

"Why do you have that paper flower pinned to your clothes?" the proprietor of a bookshop in Kabul asked a British customer yesterday. " I have seen the newscasters on BBC and Sky wearing them too. What is it for?" The explanation seemed to leave the bookseller even more confused – in Afghanistan, poppies have a very different significance...