Appearing on Friday afternoon's CBC Politics, journalist Evan Solomon previewed what may be a major strategy change by Michael Ignatieff and the Liberal party as a result of its (and his) tanking poll numbers.

Solomon said that in an interview for CBC Radio's The House to be run on Saturday, Ignatieff told him that (paraphrasing) he has backed away from a wholesale rejection of the Conservative government to opposing them on an "issue by issue" basis.

Looks like Michael 'your time is up' Ignatieff is history. 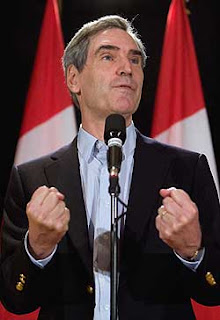 How long do you think it will take before the Cons react with the scary NDP-Libs-BQ coalition talking points after this news?

The Liberal party needs a platform, Michael. Why don't you start with that?