Rae Out; Ignatieff In

Well, this is all rather sordid, isn't it? Bob Rae, as he explained to the press today, apparently had an overnite epiphany (minus a visit from the archangel Michael [last initial "I"]) and has decided to drop out of the Liberal leadership race thus handing a coronation as interim leader to Ignatieff.

Ignatieff was lying low on Tuesday and not available for public comment, but was expected to speak after the Liberal caucus meets on Wednesday.

On his website, however, he did express gratitude for Rae's decision, writing, "His decision today reflects his commitment to the unity of our party and our purpose in these challenging times." 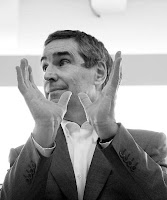 Followed by, "I'm king of the world!"

Seriously, good luck Liberals. You're going to need it.

I've expressed my (negative) opinions of Ignatieff here repeatedly so I won't get into all of the reasons that I think he would be a terrible leader for your party - which he will end up being permanently (such as that type of permanence is) if no one else throws their hat into the leadership race by the end of February. Start polishing that crown and have it ready for May, by which time the idea of a Liberal/NDP coalition will be ancient history.