Never underestimate the potential for Conservatives to be cruel.

As CBC reports, Agriculture minister Gerry Ritz couldn't stop himself from cracking extremely tasteless jokes on a conference call about the emerging listeriosis crisis in August. Yet another compassionate Conservative at work: 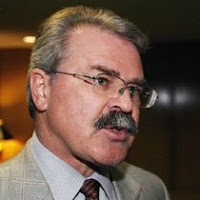 Sources who took notes during the call said Ritz fretted about the political dangers of the crisis, before quipping: "This is like a death by a thousand cuts. Or should I say cold cuts."

The outbreak has been linked to deli meats processed at a Maple Leaf Foods plant in Toronto.

When told about a new death in Prince Edward Island, Ritz said: "Please tell me it's [Liberal MP] Wayne Easter."

After this episode was revealed he was forced to apologize, saying it was "a highly stressful time". The next cliché we should be hearing from the Conservative party is that Ritz has decided to permanently "spend more time with his family".

Wayne Easter, not impressed by Ritz's apology, has (again) called for Ritz to resign:

“I don't care what he said about me, but 17 people have died. That is no joking matter,” said Mr. Easter.

Meanwhile, the Maple Leaf plant involved reopened today. I imagine the lawsuits filed against the company will take years to sort out.

As of yesterday, 47 people in seven provinces have become ill with listeriosis linked to tainted Maple Leaf meat, including 17 who have died.

On Tuesday, the Canadian Medical Association called for a public inquiry:

Canada's top medical journal is calling for a full-scale public inquiry into the listeriosis outbreak, saying the independent investigation promised by Prime Minister Stephen Harper will be "inferior to every epidemic inquiry in recent Canadian history."

The Canadian Medical Association Journal says that in August, Canada experienced the worst epidemic of listeriosis in the world.
[...]
"The fact is, this outbreak was 100-per-cent avoidable and unnecessary," says editorial board member Amir Attaran, Canada Research Chair in Law, Population Health and Global Development Policy at the University of Ottawa.

"If your food supply is safe and free of listeria, no one is going to get listeriosis out of eating the food. It's as simple as that."

The journal says the federal government's lax standards on listeria and a decision to transfer inspection duties for ready-to-eat meats from government inspectors to the meat industry "helped bring about this epidemic.

"Yet surprisingly, government has taken no remedial steps beyond issuing a food recall.

"Instead, officials praise the success of our infectious disease surveillance system - as if, with (16) dead, there were cause to celebrate - while food safety standards remain as low as ever."

"It is not a policy success to say we detected a bad food processing plant because there's the corpse that proves it," Attaran said in an interview.